94,000 fanatical fans sat on the edge of their seats at the MCG before Collingwood and Richmond’s blockbuster Preliminary Final clash.

Standing at the top of the players race were two mini Magpies, dressed in full playing kit.

One was Emmett Dunn, son of injured defender Lynden. The other was Ronan Wallace.

Ronan didn’t have a surname or number on the back of his brand new Collingwood jumper. Instead, the following words were printed: This is for you Cody.

Cody Wallace has spent a large portion of his 12 years in the Royal Children’s Hospital after the discovery of a brain tumour and related complications. The brave young man has fought through nine brain surgeries and continues to require constant care.

But there’s more to Cody than his condition. He’s a diehard Collingwood supporter, and follows his mighty Magpies religiously. He ran onto the MCG with the team in 2016, and had a special video message from Nathan Buckley delivered this week for the first ‘Cody’s Paws for his Cause’ fundraiser. 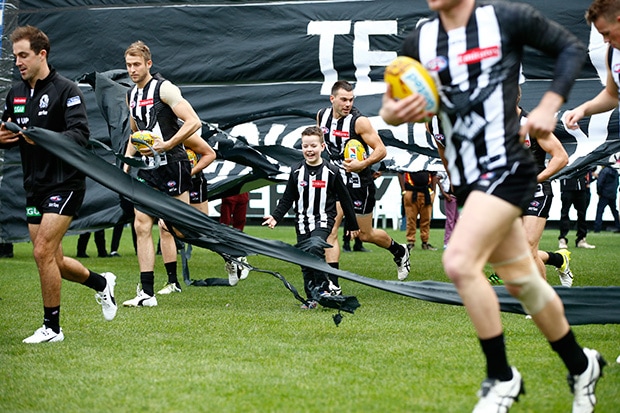 Cody Wallace runs out with the Magpies in 2016.

As the Pies of 2018 prepared for the Preliminary Final, there wasn’t anything we wanted more than Cody to be there to once again lead the team onto the field. Unfortunately he wasn’t able to make it, and this is where six-year-old brother Ronan came in!

In addition to his custom jumper, Ronan had a GoPro strapped on his head. There wasn’t a chance Cody was missing this opportunity.

Ronan and Emmett burst through the banner and completed the team warm-up in front of a near capacity MCG. Hi-fives from Scott Pendlebury, Adam Treloar and Chris Mayne were moments to savour, as was the action to follow on the field.

Cody now gets to watch his beloved Pies in the Grand Final, but there are other important tasks at hand.

Cody’s Paws for his cause will continue to raise much-needed funds to purchase a seizure dog which may save the 12-year-old’s life.

Donate to Cody’s cause here.